Jordan is one of our heroes. Full of optimism, smiles & the thickest Dublin accent from a lifetime spent here. So why did he face so many challenges becoming 'officially' Irish? 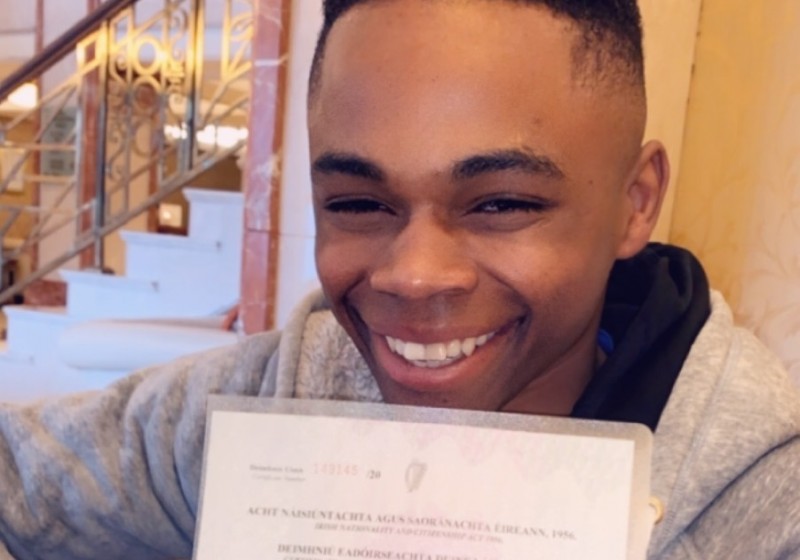 Jordan looks and sounds like your average 21 year old Dublin student: local accent, talking about ‘the lads’ and a possible trip to Amsterdam over the summer, reflecting on his college work and making time for his girlfriend and a part-time job in Dunnes Stores.

But the path he was forced to take was anything but straightforward, thanks to the tangles and red tape of Ireland’s immigration system.

Jordan was just a toddler when he first arrived in Ireland from the Democratic Republic of Congo with his dad and his dad’s partner. However, by the age of five he was in care, where he remained throughout his childhood.

As a child he went abroad a couple of times – always having to secure a visa in advance by applying in person at the destination country embassy. He admits he was lucky with the support he received from his care team, who helped him secure a medical card, PPS number and accompanied him to renew his GNIB card every year. Because he had a medical card, he was could secure a SUSI grant and go to college, which many in his position would struggle to do.

However the harsh reality of his precarious position hit home a couple of years ago when Jordan’s girlfriend booked a trip to Manchester for his birthday. He was told at the check-in desk that while he would be allowed to board, he was unlikely to be allowed back into Ireland.

Ireland. The only home he has ever known.

Jordan had previously made an attempt to get citizenship when he was still a teenager, but without a parental signature the application was refused point blank, so he decided to hold off until after he was 18, when he applied again. Citizenship applications involve a monumental amount of paperwork, made more complex if certain documents, like some of Jordan’s, are hard to get.

His first attempt was rejected. A corrected application was resubmitted. It was also rejected. When the third application was rejected because apparently the authorities felt it was appropriate to demand a DNA test to prove the 'legitimacy' of his travel document identity (the name used on first arrival to Ireland was different to all subsequent documentation), Jordan was about to throw in the towel. Even his care support team were flummoxed.

Luckily, they were told about the Immigrant Council’s support and advice service and got in touch. Immediately our helpline coordinator Colin went through the application and prepared a letter referring to the citizenship legislation, outlining how its requirements were ‘unreasonable and unjustifiable’. Colin urged the citizenship department to proceed with the application with reference to such other evidence as the applicant has placed before them, which was overwhelmingly sufficient.

What followed was a nervous wait. But Jordan didn’t give up. “I never think of what would happen if I had to leave Ireland. While it was always there in the back of my mind, I just didn’t want to think about it. I tried to keep hopeful!”

Luckily Jordan’s faith was rewarded, and he was granted citizenship on 2 March 2020 at a welcoming ceremony in Killarney. While Jordan is relieved, it’s Ireland who should feel lucky to have this bright young man firmly rooted here.

But it shouldn’t have to be this hard. As Jordan said himself, “If I was trying to do this on my own I would have given up long ago.”