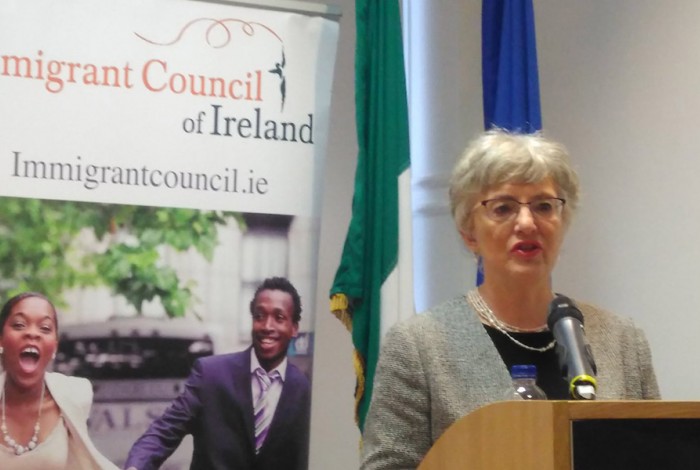 “We are not human, we no longer feel like women. We have no rights and our children have no rights. I cry every day, every day. I need help and I am frightened.”

The European refugee crisis has reached unprecedented levels and brand new research being launched today (26.01.2017) has uncovered the particular dangers and risks women and girls are facing. The research team, led by the Refugee Rights Data Project and in collaboration with the Immigrant Council of Ireland visited three Greek camps last November and is today publishing its report Hidden Struggles: Filling information gaps regarding adversities faced by refugee women in Europe.

Brian Killoran, CEO of the Immigrant Council of Ireland, said: “The team of researchers for Hidden Struggles met with hundreds of refugees and spoke with dozens of women about their specific experiences. It is clear women and girls who have endured treacherous journeys and are now living with meagre facilities in under-resourced camps face particular hardships including additional health risks, the risk of violence and child rearing concerns.

“Unsurprisingly, the majority of the women interviewed for the research felt depressed and anxious most of the time. One in five women reported experiences of physical violence during the journey and nearly half the women we spoke with felt unsafe in the camps. They also faced challenges maintaining basic hygiene for themselves and their family and faced particular difficulties accessing contraception.”

Marta Welander, Founder and Director of Refugee Rights Data Project and main author of the report Hidden Struggles said, “While we are all aware of the thousands of refugees arriving into Europe every month, because of the limited gendered research, women and girls often fall under the radar of advocacy and policy work attempting to resolve this humanitarian crisis. This research provides a crucial, fresh perspective. It exposes the urgent need for dedicated and appropriately staffed safe spaces and adequate medical and psycho-social support for survivors of sexual and gender based violence in all camps. Crucially for those in Ireland welcoming increasing numbers of refugees, the research highlights an urgent need for tailored services for refugee women arriving in their new host countries.”

Mr Killoran concluded, “The report points clearly to the recommended solutions. There must be practical improvements to the Greek camps to make them more women-friendly, including improved safety features. Improvements must also be made to the healthcare available to women in the camps. And finally we need to call on our political leaders both nationally and within the EU to deliver policy changes to ensure the experience of women asylum seekers is improved throughout the process.

“This means here in Ireland our relocation and resettlement initiatives need to be sensitive to the specific needs of women and girls. Once here, resources must be made available for local communities and the women themselves to ensure their needs are met. This means at the very least having available and accessible; gender specific healthcare, counselling services and effective structures of referral for gender based violence issues.”

What the women told us:

“The camp is a rough place. It is not safe for women when they are on their own.”

“It is just hard to survive due to the hard life and lack of medical care. All my children are sick. We are sick. The doctors need to pay attention to us and help us with medication. Not just to list what we should and should not do.”

“We don’t get contraception in [our camp], although we have asked for it. We need this. It is too hard for a woman to go through pregnancy in this place.”

“There was a woman on our boat from Turkey to Greece with four kids, including a new-born baby. About three quarters of the way through our boat began to sink and we started to swim. The woman tried to grab the kids to stay afloat but couldn’t manage in time since she also had the baby in her arms. They drowned. When the workers from Greece finally arrived to pull us out, she put the baby in the air until a worker took him. Then she drowned herself. I can still remember her face.”

In November 2016 Irish researchers including Nusha Yonkova from the Immigrant Council of Ireland and independent expert Denise Charlton (Denise Charlton & Associates) partnered with the Refugee Rights Data Project to visit Greek refugee camps and investigate the real experience of women caught up in the crisis. The report compiled from this research, Hidden Struggles: Filling information gaps regarding adversities faced by refugee women in Europe, is being launched today at 10.30am in Europe House, 12-14 Lower Mount Street, Dublin 2.

Data for the report Hidden Struggles was collected in Greece from 7-12 November 2016 and included three complementary research components: