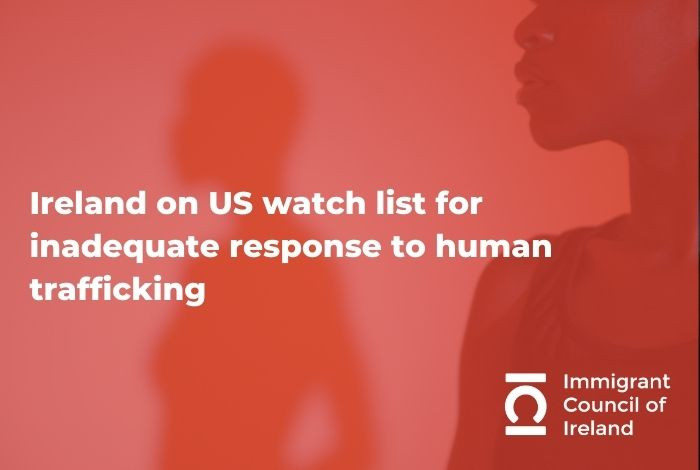 For the second year, Ireland finds itself on US State Department’s country watch list for inadequate response to human trafficking

The Irish Government has consistently failed in its international duty to curtail the practice of human trafficking in Ireland. That’s according to the most recent Trafficking in Persons (TIP) report released by the US Department of State.

For the second year in a row Ireland has been placed on the report’s ‘watch-list’ for failing to demonstrate effective actions to eliminate human trafficking. It is one of two EU countries on the list, along with Romania.

The report also outlined that 38 people were identified as victims of trafficking in Ireland in 2021, the majority of which were migrant women, trafficked for the purposes of sexual exploitation.

Commenting on the country’s repeated presence on the watch list, Brian Killoran, CEO of the Immigrant Council of Ireland, said:

“While we recognise that increased impetus has been placed on this issue by the Department of Justice, to date minimal progress has been made by the Government in carrying out previous recommendations from the TIP report, and that is evident today from the repeated criticisms. Areas such as victim identification, referral and assistance and the lack specialised accommodation and adequate services for victims continue to be major problems.

“The issue of identification has been repeatedly raised in the TIP reports, and this responsibility continues to lie with An Garda Síochána, contrary to international best practice. In the support of our clients, the Immigrant Councils legal team work very closely with the Garda Protective Services Bureau, whose professionalism in the overall support of victims of human trafficking is commendable. However, the overall process of formal identification for trafficked persons continues to be an area in need of significant reform. The swift and timely determination that a person is in fact a victim of human trafficking, and the triggering of the supports and entitlements that this entails, not only benefits the victim’s recovery, but assists in the investigation of traffickers as survivors in more stable circumstances are better equipped to participate in investigations.

“Similarly, while we welcome the recent developments that a dedicated accommodation centre for victims of human trafficking will open this autumn, it has taken over a year for the Government to take these incremental steps. Meanwhile victims of human trafficking continue to be placed in the unsafe environment of mixed gender direct provision centres without proper access to the appropriate services.”

“Victims of human trafficking are predominantly migrant women and girls exploited in the sex trade. Having endured significant trauma, these women have very unique needs that are not being met by the State.

“The process to identify victims must be swift and effective and expanded to include people seeking international protection who are currently excluded from the formal identification process. And while these procedural changes take time, efforts can be made in the here and now to provide gender-appropriate accommodation and psycho-social supports for identified victims by leveraging existing networks of shelters and supports for victims of domestic violence. Both domestic violence and human trafficking are forms of gender-based violence, and victims of both have very similar needs to recover and heal. Appropriate housing and supports for trafficking victims will ensure these people avoid further trauma in mixed-gender direct provision centres, that are wholly inappropriate for their recovery.

“The Government not only has the opportunity to act now and start the healing process for these people, but also the international responsibility to make Ireland a less desirable place for human traffickers to operate.

“The fact that Ireland has been placed on the US State Department’s watch list for two years in a row should be incentive enough for the Irish Government to finally take this matter seriously and do what needs to be done. International credibility aside, the longer we wait, the longer and harder the road to recovery is for these victims.”

To read the full Trafficking in Persons 2021 report, visit the US Department of State website.