World Day Against the Trafficking in Persons 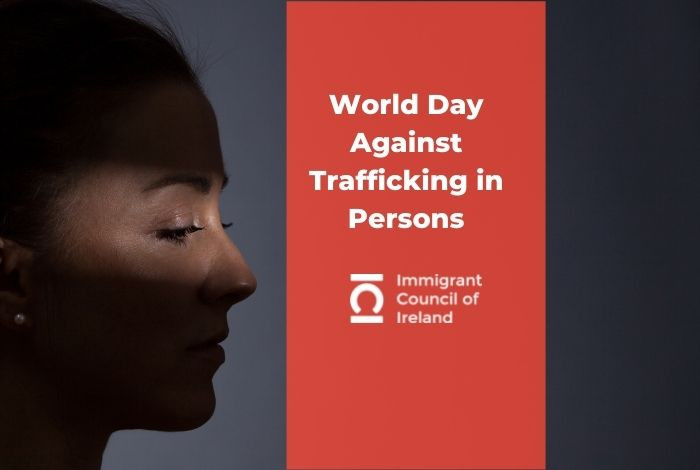 Friday 30 July is the World Day Against Trafficking in Persons, a global day organised by the UN to recognise the massive issue of human trafficking across the world and the horrendous trauma the practice causes to millions of victims, especially migrants.

Working to end human trafficking is a major goal for the Immigrant Council of Ireland. Each year our legal team supports dozens of women and girl migrant victims of trafficking, mostly who are being exploited in the sex trade. The help we provide them ranges from helping to secure their immigration statuses, reunite with family members, and access social supports in order to start rebuilding their lives.

Meet a few of our clients: Survivors of human trafficking

We also work alongside our anti-trafficking partner organisations both here in Ireland and across the EU on projects and initiatives that identify the best practices in supporting victims of trafficking in recovering from exploitation.

This year’s theme for the World Day Against Trafficking in Persons highlights the importance of listening to and learning from survivors of human trafficking. Survivors are key actors in the fight against human trafficking. They play a crucial role in establishing effective measures to prevent this crime, identifying and rescuing victims and supporting them on their road to rehabilitation.

The Immigrant Council is proud to have amplified the voices of survivors of trafficking in our research projects, which seek to develop best practices for supporting survivors in reclaiming their lives.

Learn more about our anti-trafficking work.

Did you know? For two years in a row, Ireland has been placed on an international watch list by the US Department of State for not doing enough to fight trafficking. In 2020, 38 people were identified by authorities as being victims of trafficking – the majority migrant women exploited in the sex trade. We know the actual number is much greater though as victim identification in Ireland doesn’t work as it should. Read more.

Would you know how to identify trafficking taking place?

Watch our video below:

The Immigrant Council is dedicated to ending human trafficking and supporting survivors. Throughout the year we regularly run free training workshops to help frontline service providers, organisations and individuals identify trafficking when they see it and to know how to refer victims to available supports.