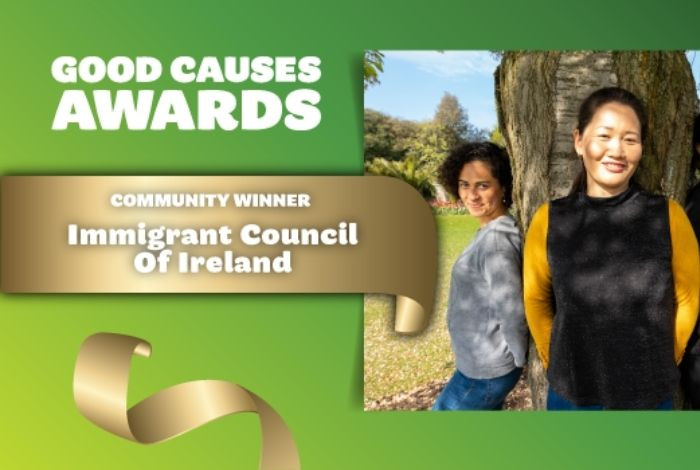 The charity, which works in the areas of immigration law and reform and promotes the diversity and inclusion of migrants across all aspects of Irish society, was one of 36 finalists in this year’s Good Causes Awards, winning the Community Category and prize grant of €10,000.

Since 2019, the National Lottery Foundation has celebrated the inspiring and innovative work being carried out by the thousands of individuals, organisations and groups across Ireland who benefit from National Lottery Good Causes funding. Each of the 7 category winners receives €10,000 for their Good Cause and the overall winner is awarded €25,000 to continue their work in their community.

The awards were announced at a virtual ceremony from Dublin’s Mansion House, featuring An Taoiseach Micheál Martin as guest of honour and hosted by award-winning broadcaster Gráinne Seoige. The judging panel made up of Nuala Carey, Seamus Griffin, Fergus Finlay, and Jennifer Crowe was also in attendance, having made the final decision on the winners following virtual interviews with all 36 finalists.

“The Immigrant Council is absolutely floored by this win and enormously grateful to the judges and everyone at the National Lottery Foundation for this amazing honour.

“We’re a small organisation with a small team but we have large ambitions to achieve an Irish society that is equal and welcoming for everyone including people from a migrant background.

As the last year and a half have demonstrated, there is much work to be done in this area: From continuing to fight racism and stem the rise of hate speech, to advocating for the reform of the country’s outdated and overtaxed immigration system including direct provision, we have our work cut out for us.

“The Immigrant Council depends on donations and fundraising to do much of its work. Today’s win and the grant of €10,000 will be a huge help to us in achieving our goals to bring about an equal and diverse Ireland and ensuring that no migrant is left behind. On behalf of everyone here at the Immigrant Council and the thousands of people we help each year, thank you for this award.”

The Immigrant Council of Ireland is the leading national human rights organisation working to defend migrant rights in Ireland. It provides free immigration advice and legal support through its helpline and law centre, as well as campaign for immigration reform. The Council also provides support to victims of racism and human trafficking, and provides opportunities for migrants to connect with each other and their communities.