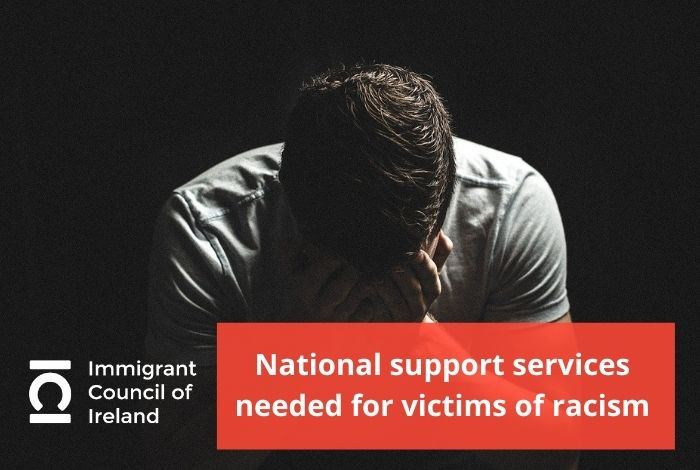 The Immigrant Council of Ireland is calling on the Government to implement comprehensive victim support measures, including access to legal advice, counselling services and training for frontline staff. These must be developed in partnership with civil society and funded by the State as a matter of priority. Such measures should be a part of the upcoming National Action Plan Against Racism.

The organisation is marking its 10th year anniversary of working at the frontline providing support to victims of racism. In this timeframe the Immigrant Council provided one-to-one advice and referral services to almost 800 individuals victimised by racism and discrimination. In recent years, the Immigrant Council has been unable to meet the increasing demand for racism victim support due to ongoing challenges with funding and resources and is calling on the State to fund the development of dedicated support networks to meet the increased need.

Dr Fidele Mutwarasibo former Integration Manager at the Immigrant Council who was working with his colleagues on setting up the anti-racism service, said: “In 2011 the Anti-Racism Helpline was the only dedicated national support service to people victimised by racism, and it continues to be the only nationally available support service to date. It is disappointing to see that not much has changed in the last 10 years for victims of racism. While it is positive to see the improved recording of racist incidents by Gardaí and the commitment by Government to introduce both hate crime legislation and a National Action Plan, it is disappointing to see that not much has progressed in the last 10 years in how Ireland supports victims of racism. Racism is still not taken seriously, victims suffer in silence, and civil societies like the Immigrant Council struggle to fill the gap left by State services in supporting victims.”

The Immigrant Council recognises the importance of reporting and data collection in the fight of racism. However, people victimised by racism expect validation, justice and meaningful support.

Joy-Tendai Kangare co-founder of Rooted in Africa-Ireland (RIAINetwork), a community organisation aimed at supporting young people and families who identify or are identified as Black in Irish society, said: “Reporting of racism and data collection serves only those who are unaffected. We all have an experience where we reported racism and nothing could be done due to lack of proper legislation. I feel that the Black community are losing trust in the system. There are no supports available to victims of racial abuse and/ discrimination, so it is up to grass roots organisations like Rooted in Africa-Ireland to help  members of their own community.”

The Immigrant Council also advocates for setting up national standards of victims support. To support this, the organisation is working on a guiding document and training for frontline staff on how to provide victim-centred support services to people experiencing racism.

Valeria Aquino, Integration Officer at the Immigrant Council, who has been working as part of the Anti-Racism Support Service, said “There is a lack of services to support victims of racism and discrimination, especially at the local level, so the information and help not always reach people that need it most. Racism is a traumatising experience and the least people deserve is access to quality support regardless of where they are based. We want to share our expertise with anyone who wants to be involved in active racism victims’ support.”

The Immigrant Council’s Anti-Racism Support Service was created in 2011 to monitor racist activity and provide bespoke emotional support to victims and witnesses of racist incidents. Since that time the service has supported almost 800 service users. The service is available online at www.immigrantcouncil.ie/reportracism.

As part of the International Day Against Racism, the Immigrant Council of Ireland will be delivering a free public webinar on 22 March 2021 from 6pm-7pm exploring the need for proper racism victim support.